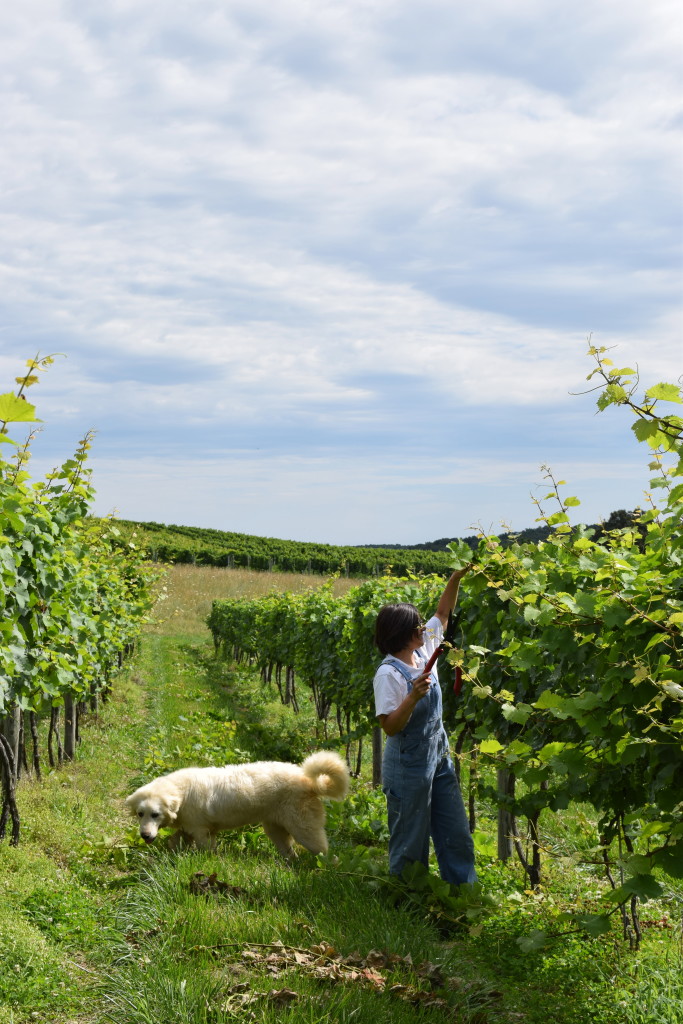 The Lemberger rows are 750 feet of jungle.

I’m hedging reisling earlier in the season, before it became a tidal wave. Even so, it’s hard work for me. I wear overalls in the vineyard because I like loose clothes when I’m sweating. They look awful, though.

John also hedging riesling, earlier in the season. He’s taller and a man. It’s easier for him.

My husband offers encouragement. “Quit whining. You want to get rid of your bat wings, don’t you?”

It’s true, hedging is great for the upper arms. Like most jobs at Ox-Eye, hedging is done by hand, one row at a time. With close to twenty-five acres of vines, though, there’s a lot to hedge. (In fact, we can’t do it all ourselves—Hector and his crew are vital to us—but we do as much as we can.)

It’s late July, and we’re in the midst of a heat wave. Temperatures are reaching the mid to upper nineties, but feeling like a hundred. And it’s humid. The combined influence of heat and moisture has boosted vigor in the vineyard. The growth cascades over the top catch wires like a pipeline wave, hiding the grapes in a curtain of greenery. This is, in fact, our second pass through these vines this summer, but it feels like the first.

Under the best of conditions, hedging is my least favorite vineyard job, but in this heat and humidity it’s Hell. We go out early before the sun’s too strong, slogging through dew in the high grasses, and quit before noon. Then, after dinner, we’re out again until the sun dips too low. Even so, salty sweat beads down our back and drips from our foreheads to sting our eyes. Each row, we hedge down one side and back the other. It takes John, my encouraging husband, about an hour to do one 750-foot row. It takes me more than twice that time. In fact, I rarely finish a row on my own—someone usually comes to “help Mama out.” I get an awful crick in my neck from looking up so long.

There are several reasons why we hedge. First, a heavy canopy traps in heat and moisture and blocks air flow, making a perfect environment for disease. We don’t want that. Also, the vines’ energy should go to the fruit and not to growth; by hedging we encourage that. Only a certain number of leaves are needed to ripen each grape cluster. Lastly, the grapes need sunlight to ripen, and hedging allows the sun through. We not only hedge, but leaf pull around the fruiting zone on the east facing side, so the soft morning sun can reach the clusters and dry them off. We don’t leaf pull as much on the western side because harsh afternoon sun can burn the grapes. Leaf pulling is usually done separately from hedging. I don’t mind leaf pulling.

Here’s what’s depressing: I hedge a long row for over half an hour and still see the start of row, but the finish is not in sight.

Japanese beetles are a problem. They swarm the vineyard usually on the north end (don’t ask me why), devouring the leaves. All winegrowers in Virginia are at war with the Japanese beetles. My sister-in-law, who is Japanese, insists, “These are not Japanese beetles. Japanese beetles are pretty.” Call them what you like, when I’m hedging I hate them. They dive bomb me, getting into my hair and down my shirt. They poop on me. This is another reason hedging is no fun.

Every now and then I come upon a bird nest protected in the vines. This startles me until I see that it’s empty. Here’s why: where there’s young defenseless birds or unhatched eggs, there’s often a snake, maybe winding its way through the tall grass, or maybe already slithering in the canopy, unseen in the foliage. I’ve seen them in the grass. My daughter had an encounter with a rat snake in the canopy. Rat snakes are hulking gray-black things with white bellies.

This nest was empty. I’m now worried about a snake nearby.

The Mexicans laugh. “Hey, jeffe (that’s John), Manuel chopped the head off a black snake this big, ha, ha!” The Mexicans always laugh, but they don’t like snakes either.

As I write John and my daughter are slaving in the vineyard. I’m here, at the kitchen table, typing this blog. Truth be told I do very little vineyard work. John just calls on me when he’s desperate, or when it’s an all-hands operation like netting (about to happen). But the point I’m trying to make is that while there’s an undeniable romanticism surrounding vineyards and wineries, there’s also a heavy dose of blood, sweat, and toil.