A Tale of Two Lembergers 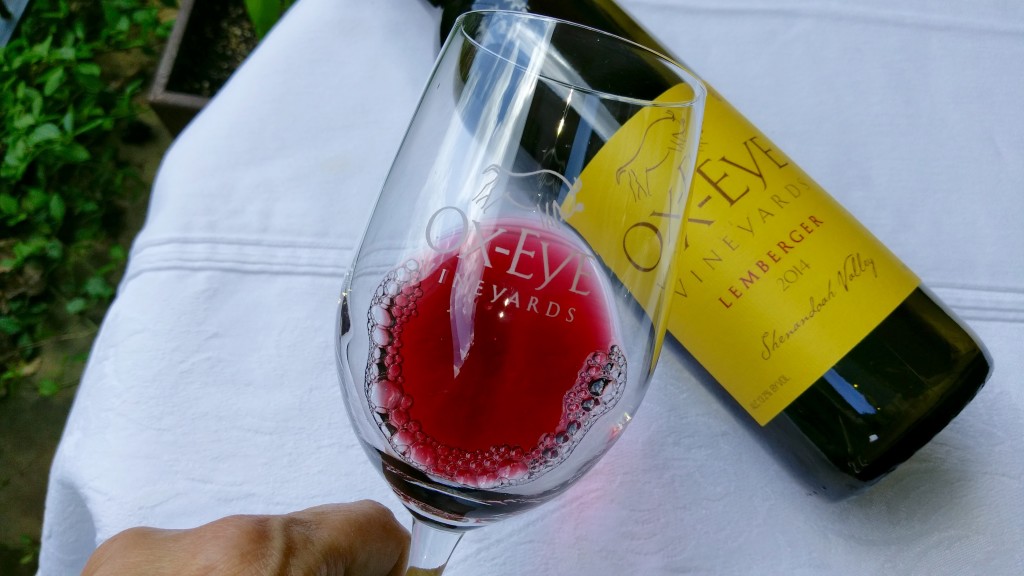 Lemberger, that Austrian grape with the stinky cheese name, has been a mainstay at Ox-Eye Tasting Room since we opened. This not-so-well-known grape with pink pulp and blue/black skin is often used in Europe’s cooler growing regions, such as Austria, Germany, and parts of Eastern Europe, as a blending grape, adding color or softening tannins of other varieties. It is also bottled on its own, sometimes under the name Lemberger (as at Ox-Eye) and sometimes under the name Blaufränkisch or Franconia. Because of our higher elevation, Ox-Eye Vineyards is a cooler climate site, and Lemberger grows and ripens well for us.

Since the day we first poured it (April Fools Day, 2011), Lemberger has been a hit. Peppery but soft, with cherry undertones, it’s a great wine for red meats, but equally nice with salmon, lamb, and chicken. With versatility like that, it’s not surprising this wine has gained a loyal following.

For almost a year now, our Lemberger fans have had the good fortune to sample two very different vintages of this lovely variety: 2013 and 2014.

Ah, vintage! —the year the grape was grown and harvested. Weather, just like climate, greatly influences the aromas, flavors, and mouth feel of wines. How often have you fallen in love with a particular wine, then bought the same variety from the same winery a year later and had a slightly (or totally) different drinking experience? Virginia, with its sometimes cool, sometimes hot, sometimes wet, sometimes dry grape growing seasons, is a vintage driven region. Virginia wine growers are fond of saying, “2010: now that was a good year.” Long. Hot. Dry. Perfect for grapes.

Never has the power of vintage been more on display for us than with this vertical tasting of the 2013 and 2014 Lembergers. These two vintages are so strikingly different, the wines seem like different varietals.

Lemberger 2014. A cloud kept passing, making it hard for me to capture the purple color here. In trying to brighten the picture, I think I lightened the wine.

These two wines were harvested from the same vineyard (Ox-Eye), and treated the same way by the winemaker (my husband, John.) The only substantial differing factor is the vintage, and the difference in these vintages was a cool August (2013) verses a hot August (2014). The coolness of 2013 kept the acidity high, making it seem like the lively, bratty little brother to the deep-thinking 2014; but the more astute of you may have noticed that deep-thinker 2014 is a full year younger than the perpetually impish 2013.

Interestingly, the two wines have equal followings. As many customers prefer ’13 as ’14. I know I have my preference, but I won’t say which. We won’t have these two vintages forever. Please come by and judge for yourself!